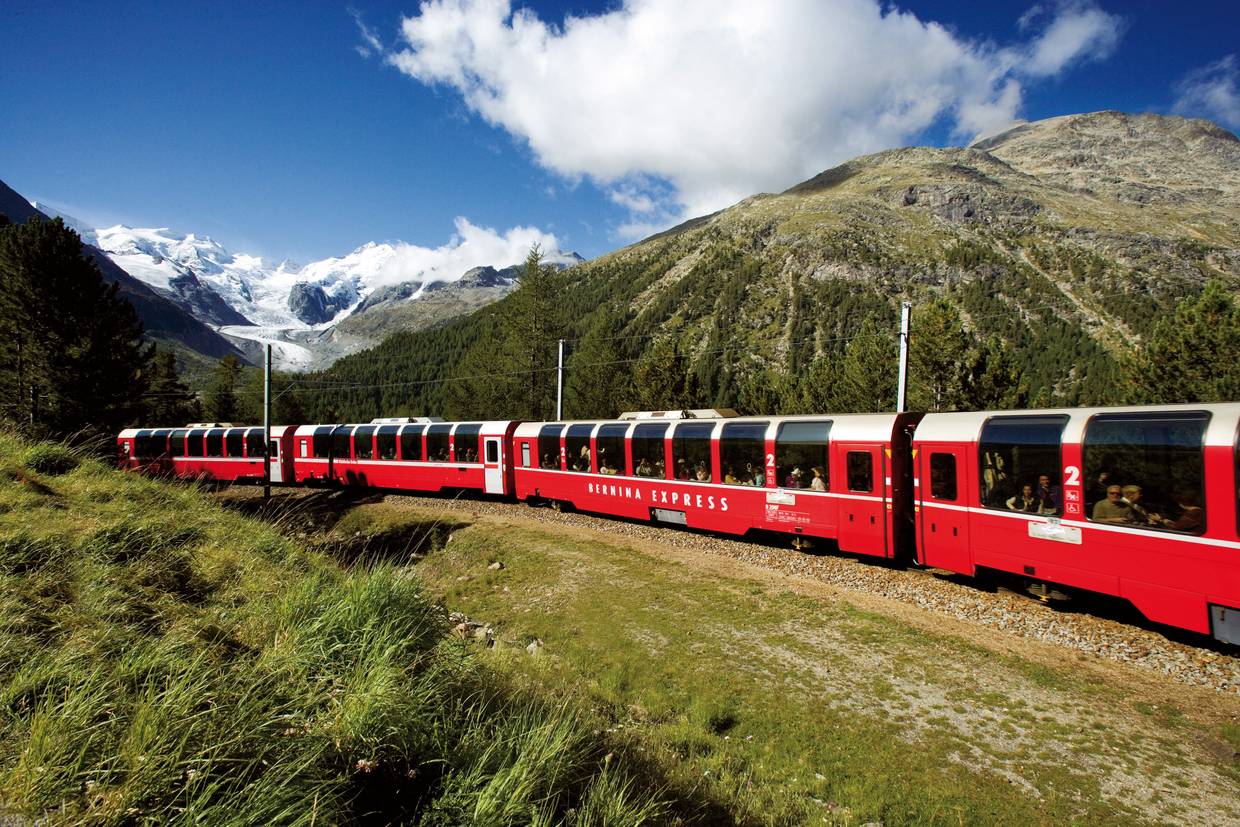 A large number of attractions is easily accessible with the Rhaetian Railway (RhB):

Val Roseg: One of the most picturesque valleys in Engadine. On the adventure trail, "Fix", the smart fox, shows children the beauties of his valley and everything you can sniff, hear and see. At the end of the trail, next to Restaurant Roseg Gletscher, there is a surprise. On a tour of charming Pontresina, there are traditional Engadine houses and the elegance of large Belle Époque hotels to discover. On the Ibex promenade from the church of Sta. Maria, both children and adults will find entertaining information on the character of the animal and its habitat.

In summer when the weather is good, salon music is played daily at 11.00 am in the midst of the forest Taiswald (Camerata Pontresina).

On the Morteratsch Glacier Trail, 16 stops provide information about the receding of the third-longest glacier in the Eastern Alps and about the mysterious life in its vicinity. Families can follow the stories of "Sabi", the glacier ghost, in the unique nature and gather exciting impressions. There is a suprise at the end of the trail. Waterfall Trail "Cascada da Bernina": a walk along the river Ova da Bernina, which plunges over 200 metres into the depths, walk with many beautiful viewpoints. Morteratsch Dairy Farm: Traditional. Authentic. Cosy. The restaurant caters for guests daily from mid-June to the beginning of October. Highlight: traditional show cheese making.

Diavolezza: Spectacular scenery a stone's throw from the glacier. Glacier hike: Hike with qualified mountain guides from Diavolezza through the breathtaking ice and mountain world to Morteratsch.

Over 18 million cubic metres of water can be stored in Lago Bianco and secured for times of higher demand. The water of Lago Bianco flows via the rivers Adda and Po into the Mediterranean. The watershed at the Bernina Pass is at Lej Nair from where the water flows into the Black Sea. The Camera Obscura ("Darkroom") allows visitors to perceive the Bernina area in a completely new way and to let their perception reflect. On the eco-path to Cavaglia you can discover the world of energy hiking. Children can go on an adventure trip with "Pluschin" and discover the secrets of hydroelectric power production. A little surprise is waiting at the end.

Ristorante Albergo Alp Grüm: The only hotel accessible on foot or by train only! From the viewpoint Alp Grüm you can enjoy a breathtaking panorama of the Valposchiavo and as far as the Bergamascan Alps, as well as Palü Glacier and Piz Palü.

Cavaglia Glacier Garden: Take a journey through time to the pots of the giants. "Grummo", the peaceful giant of Cavaglia, awaits the kids. This story, like the story of "Sabi", the Morteratsch Glacier Ghost, is linked to a paper chase.

Poschiavo amazes with a picture-book village centre, the so-called Borgo: narrow and picturesque are the alleys with well preserved and historically significant buildings. Three majestic towers dominate the village. A treasure hunt in the Borgo, the historical centre of Poschiavo, is fun for children and adults alike. The Museo Poschiavino